Our Web Controlled Arduino Robotics summer camp has come to an end and several happy campers are leaving with epic robots! Check out what these kids have built at STEAMLabs–it might inspire you to create some awesome robots of your own.

A flashlight might not seem like a super cool robotics project, but that’s only because you haven’t seen this smart flashlight one of our campers created. But don’t take our word for it, see for yourself:

So what makes it work? Well, the square of light on the top is made up of NeoPixels, tiny programmable LED lights often used in wearable electronics. If you’ve seen somebody with a shirt that lights up, odds are it’s powered by NeoPixels. In this case, our camper connected the NeoPixels to a Particle Arduino board and used the Arduino board to connect their NeoPixels to a web page.

As for the case, our camper designed the entire thing in Tinker Cad and 3D printed it in three separate pieces, gluing them together to make the flashlight solid. 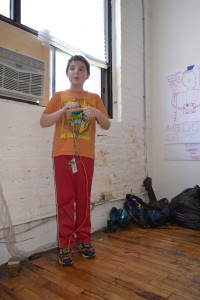 To combat this issue so he could play Minecraft on his computer instead of his Xbox, one of our campers created his own joystick controller using a Makey Makey. It might not be as sleek as an Xbox controller, but it’s certainly effective!

What are some of our favourite things? Robots! Dinosaurs! Robotic dinosaurs! Especially this one, made by one of our campers:

The box is the dinosaur’s body, containing everything it needs to function: a Particle Arduino board, a motor and a crazy amount of wires. Large chunks of plasticine hold the motors in place and weigh down the front of the robot to balance him out. The legs and tail are actually springs with coloured plasticine forming the details–right down to long, curly claws on the feet.

These days there’s an app to track everything: your finances, your diet, the number of steps you take on a given day and even your heart rate. They make it easier to keep track of your life so you can stay organized and accountable, but this heart monitor has a different–but just as important–job.

This particular heart monitor is meant to connect with a phone belonging to someone you love. If your heart stops, the device automatically sends a message to your loved one’s phone so they can call you an ambulance. Most of the devices in this list make your life easier, but this one could actually save your life.

Many hours of careful wiring make the sleek design possible, although this young boy will probably want to make it evn

Nobody really likes cleaning their house and this kid is no different. His robot can be driven around the room using a web page he created. A cloth hangs off of the robot’s back and tilts towards the ground as it moves, cleaning the floor as it goes. 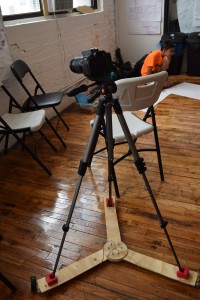 Tripods are incredibly useful, but they also tend to be heavy and awkward to carry. So this kid built himself a robotic tripod carrier. The robot is connected to a remote which can be used to move it forward, backward, left or right. For now the robot can only move a few feet–the remote is attached by a cord–but one of the awesome things about these robots is that kids can add new functions at home!

This awesome robot has a cup holder and a tray big enough to hold a plate of food. It also features a hook designed to grab snacks and other goodies for you. Like most of the other robots, this one is controlled by a website the kid created himself.

Between work, school, and an active social life it can be difficult to remember to water your garden. That’s why this robot keeps track of your plants for you. Three moisture sensors stuck in the soil around the robot tell it when different plants need watering. When it detects a dry patch of soil, the robot turns to the dry patch and waters it. The system is set up to only water the plant for 3 seconds, so you won’t flood it either!